You are here: Creative Absolute 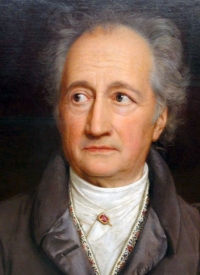 Goethe
Johann Wolfgang Von Goethe
(28 August 1749, Frankfurt am Main, Holy Roman Empire (now Germany) - – 22 March 1832 Weimar, Duchy of Saxe-Weimar-Eisenach, Germany) (aged 82)
Nationality: Germany
Category: Art workers
Occupation: Writers, Poets, Philosophers,
Unique distinction: Most influential German writer and poet, one of the key figures of European culture. Polymath.
Gender: Male
Quotes: 1. For a man to achieve all that is demanded of him, he must regard himself as greater than he is. 2. When we treat man as he is we make him worse than he is. When we treat him as if he already was what he potentially could be We make him what he should be. 3. Magic is believing in yourself, if you can do that, you can make anything happen. 4. Whatever you can do or dream you can, begin it. Boldness has genius, power and magic in it! 5. To create something you must be something. 6. Every situation--nay, every moment--is of infinite worth; for it is the representative of a whole eternity. 7. Nothing is worth more than this day.
Read more... 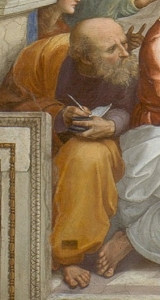 Anaximander
Anaximander of Miletos
(610/609 BC Miletus, Asia Minor (Now Balat, Turkey) -546/540 BC, Miletus, Asia Minor)
Nationality: Greece
Category: Votaries оf Spirit,
Occupation: Milesian school, Philosophers
Unique distinction: The founder of Cosmology, one of the founders of Hylozoism, one of the pioneers of exact science, first of the Greeks to publish a written text, Ionian tradition, Milesian school, Naturalism and Monist school
Gender: Male
Quotes: 1. There are many worlds and many systems of Universes existing all at the same time, all of them perishable. 2. There cannot be a single, simple body which is infinite, either, as some hold, one distinct from the elements, which they then derive from it, nor without this qualification. 3. The Earth is cylindrical, three times as wide as it is deep, and only the upper part is inhabited. But this Earth is isolated in space, and the sky is a complete sphere in the center of which is located, unsupported, our cylinder, the Earth, situated at an equal distance from all the points of the sky. 4. The source from which existing things derive their existence is also that to which they return at their destruction. 5. Immortal and indestructible, surrounds all and directs all.
Read more...

Hippocrates of Cos - Short Biography, Contribution to Medicine and Quotes 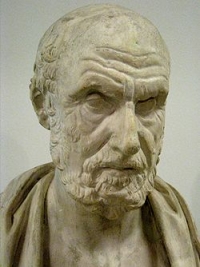 Hippocrates of Cos
(ca. 460/ 450 BC , Island of  Cos, Ancient Greece - 377/370 BC, Larissa, Thessaly, Greece)
Nationality: Greece
Category: Scientists
Occupation: Physicians, Philosophers,
Unique distinction: The father of Western medicine, the author of the humoral theory of temperaments
Gender: Male
Quotes: 1. "First, do no harm." Primum non nocere (Latin). 2. Life is short, art long, opportunity fleeting, experience treacherous, judgment difficult. 3. Let food be thy medicine and medicine be thy food. 4. Wherever the art of Medicine is loved, there is also a love of Humanity. 5. Walking is man's best medicine. 6. It is far more important to know what person the disease has than what disease the person has. 7. Natural forces within us are the true healers of disease.
Video: The Father of Medicine
Read more...

Herbert Spencer
(27 April 1820, Derby, Derbyshire, England - 8 December 1903, Brighton, Sussex, England) (aged 83)
Nationality: United Kingdom
Category: Scientists
Occupation: Sociologists, Philosophers, Psychologists,
Unique distinction: The founder of System of Synthetic Philosophy and theory of  Social Darwinism,  Polymath and one of the leading English radical individualists.
Gender: Male
Quotes: 1. Love is life's end, but never ending. Love is life's wealth, never spent, but ever spending. Love's life's reward, rewarded in rewarding. 2. No one can be perfectly free till all are free; no one can be perfectly moral till all are moral; no one can be perfectly happy till all are happy. 3. Objects we ardently pursue bring little happiness when gained; most of our pleasures come from unexpected sources. 4. Opinion is ultimately determined by the feelings, and not by the intellect. 5. Marriage: a ceremony in which rings are put on the finger of the lady and through the nose of the gentleman. 6. Music must take rank as the highest of the fine arts - as the one which, more than any other, ministers to the human spirit. 7. Be bold, be bold, and everywhere be bold.
Read more...

TRANSLATE with x
English
TRANSLATE with
COPY THE URL BELOW
Back
EMBED THE SNIPPET BELOW IN YOUR SITE
Enable collaborative features and customize widget: Bing Webmaster Portal
Back